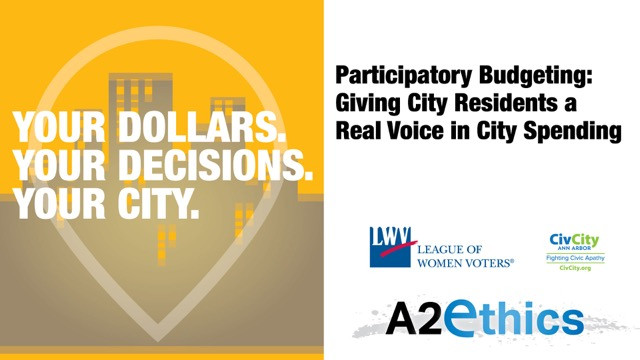 'City Budget 101' and the Ethics of Public Funding and Engagement

Karen Lancaster, finance director for the city of Ann Arbor, discusses the annual budgeting process for the city with us in what you could call a ‘Budget 101’. Walking through the stages of the budget process and different city funds, Karen suggests several ways citizens can be more informed and influential on their local budgets, such as coming to City Council meetings early on in the process, tracking funding allocations online or signing up for email updates. She also talks about some of the ethical challenges she faces in her role, such as making cuts or deciding where staff should be allocated, and how concerns about ethics can often dovetail with concerns about public funding. One example of the latter is the city's deer culling plan. Additionally, Karen highlights several ways individuals can be civically engaged beyond voting, such as Give 365, a program by which city residents can get involved in different community initiatives. She provides her thoughts on how lower-engagement groups, such as high school students, can be motivated to get involved, as well as how town-gown partnerships could enhance the city and the University of Michigan.

This understanding of the budget is key to our Participatory Budgeting initiative, (PB) which seeks to give residents a chance to propose, discuss and decide how designated parts of the city budget will be spent annually. Residents submit project ideas on capital improvement (also called touch-and-feel) projects to improve their city. They work together with fellow residents as well as city experts and staff to turn these ideas into practical budget proposals. The proposals are then voted on citywide. At the end of the cycle, the city commits to implement and publicly review the projects after they are completed. While PB is not currently in place in Ann Arbor, Karen's tips on getting involved provide some traditional ways for citizens to have their voices heard on the city's budget and become more civically engaged.