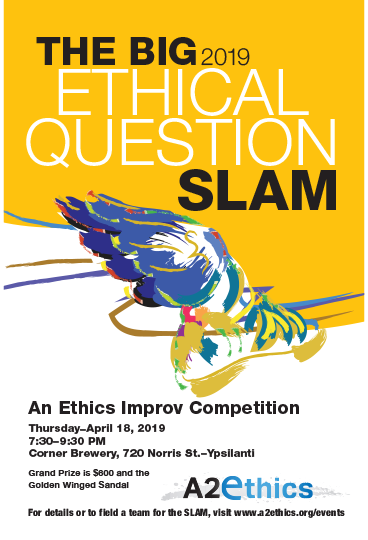 This year, Ypsilanti is Slam City. And you are invited.

Join us as we listen, laugh, applaud, agree and disagree with teams of locals willing to share and present their best answers to some of the most compelling and confounding ethical issues of our time. Bring your friends too.

So, what exactly is a Big Ethical Question Slam?

It's a "think-off" with oversized aspirations. That's the BIG part. It's also a congenial community get-together over drinks and eats to discuss the whats, hows and whys of doing the right thing. That's the ETHICAL QUESTION component.

And it's an evening that makes an impact. That's where the SLAM comes in.

The Big Ethical Question Slam gives teams a chance to compete for a $600 Grand Prize...and the Philosopher's Golden Winged Sandal. To learn more about how the Slam works, here are the Rules.

Being the Slam champion also assigns the winner reasonable claims--or some would say bold rights--to lack humility for at least a year as the best big ethical question slammers in the Ypsilanti and Ann Arbor area.

So do the right thing.

Form a Slam Team.
Check out this year's Questions.