Ann Arbor, MI – In February of this year, nearly 150 students, 30 volunteers, 26 faculty and philosopher coaches, and 50 judges gathered at the University of Michigan for the 7th annual Michigan High School Ethics Bowl. And for the second year in a row, they were joined by bold and daring student-artists who had volunteered to document and interpret the event through their real-time sketches and graphic impressions.

For Bowl participants and spectators alike, the scribes’ artistic portrayals added a vivid, expressive dimension to the ethical discussions that took place among teams from 14 schools and 8 counties across the lower peninsula. The “mini-murals” produced by the scribes, which were on display during the Bowl itself, can now be viewed on A2Ethic’s website. 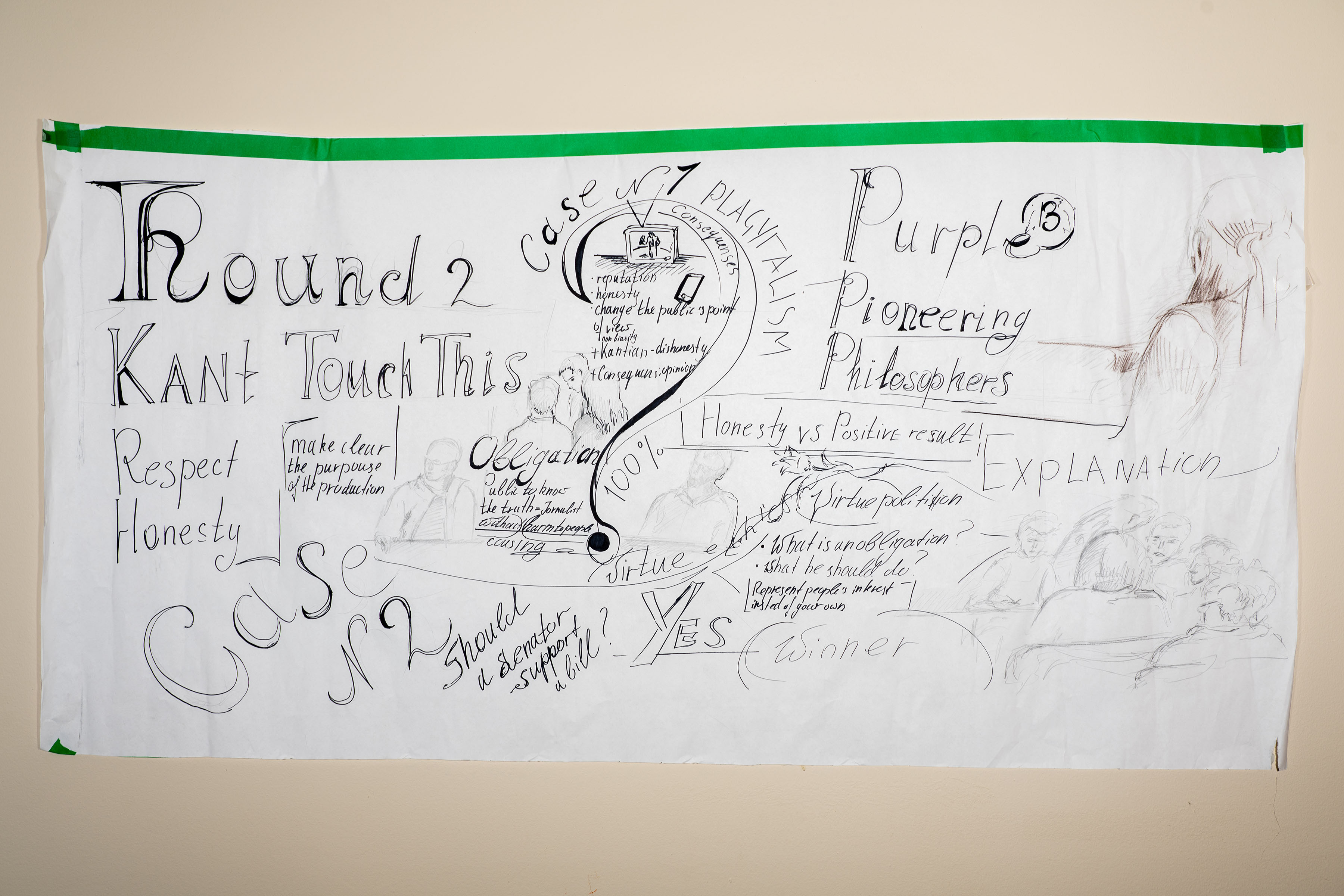 In this depiction, Anya Krishstaleva from Meadow Montessori High School of Monroe, the first of the visual scribes, highlights the spirited discussion of a case between teams from Saline and Ann Arbor Pioneer High Schools during the 2019 Michigan Bowl.

As A2Ethics’ president Jeanine DeLay explains, “The Visual Scribes project was inspired by the chronicles and portrayals of events, ceremonies and rituals by artists from ancient China, Korea and Japan. By reviving this time-honored tradition, our initiative recognizes the value of visual thought in ethics and the contributions of philosophy to artistic endeavors. The Scribes project also encourages us to learn about and study the philosophical legacy and vitally important philosophies of those regions.”

DeLay goes on to note that, as the first initiative of its kind, the Visual Scribes project opens up new opportunities for students interested in joining the Michigan Bowl, an early supporter of the nationwide ethics bowl movement. 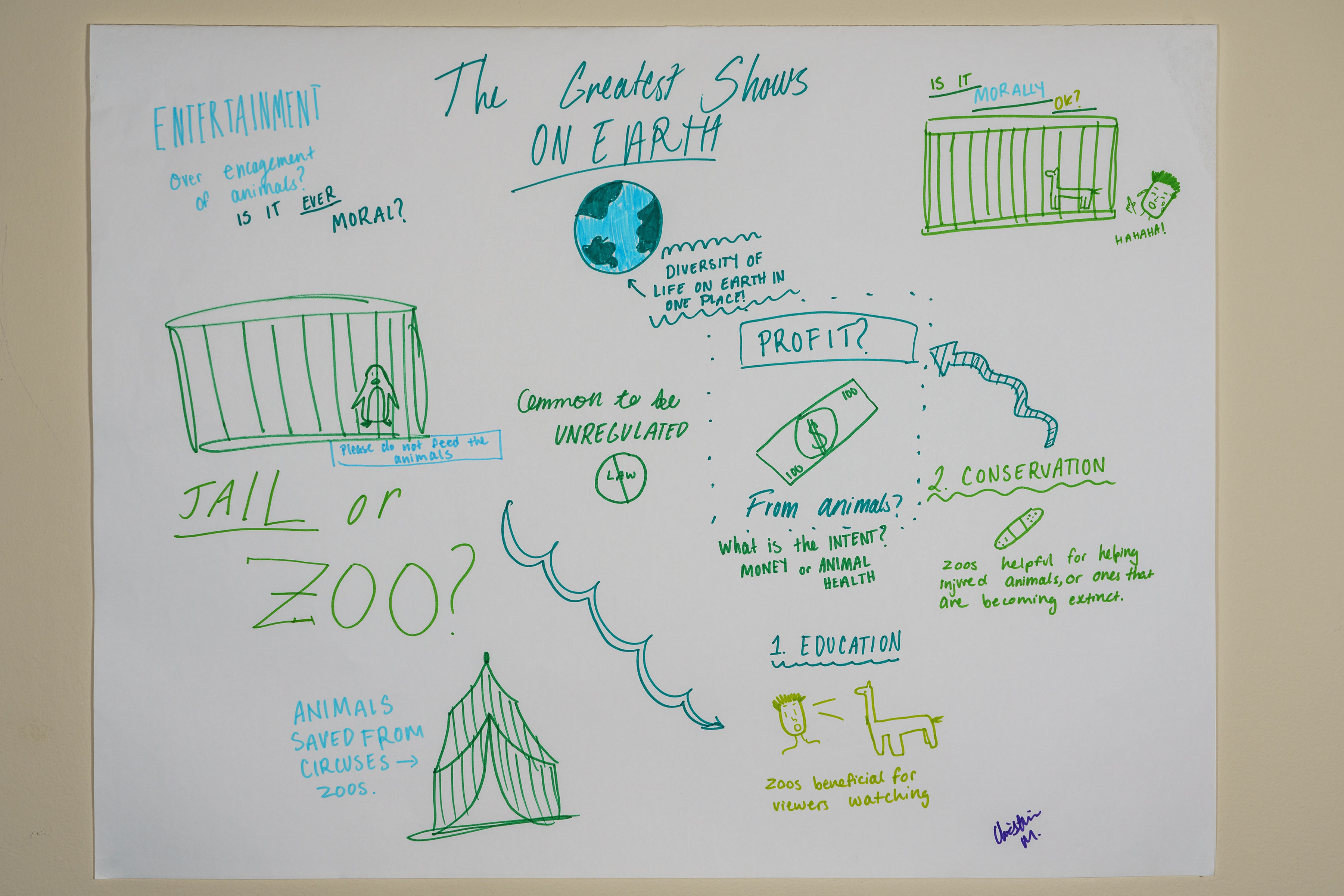 For this year’s Scribes, the experience proved to be both challenging and satisfying. Gabby Awada became intrigued after learning about the opportunity from Veronica Toth, the University Liggett Ethics Bowl coach. She participated in several whiteboard practice sessions with the school’s team, the Philoso-Five, prior to the Bowl. Even so, she notes that the actual event was a learning experience on multiple levels. “I volunteered because I love to draw, and I love interpreting other people’s words into art,” she says. “It was fun, but it was also nerve-wracking because I had a time limit, just like the teams, and my brain couldn’t really process everything that was being said. I learned that, maybe, I’m not as fast as I had thought. But being a visual scribe also taught me how to think on my feet.” Gabby enjoyed the experience so much that she plans to volunteer for next year’s Bowl. “I would love to do this again. And the next time, I’ll be more prepared for it.”

The Visual Scribes initiative is a notable example of the diverse organizations and individuals that come together each year to make the High School Ethics Bowl program a success. That includes:

This year’s contributors also included 12 case study writers. Michigan is unique in the nation for its case study contributors, all of whom either reside in—or have past or current ties with—the state. Case studies for the 2020 Bowl spanned an assorted range of topics, from gene testing to the ethics of zoos, from plagiarism to uterus transplants, and from the use of children as bone marrow donors to the ethical challenges of providing protection for international peacekeepers. Despite the potentially contentious subjects, Bowl organizers point out that the event is not designed to pit one perspective against another, but rather to encourage students to consider differing viewpoints and flex their analytical skills on the relevant ethics issues in each case. 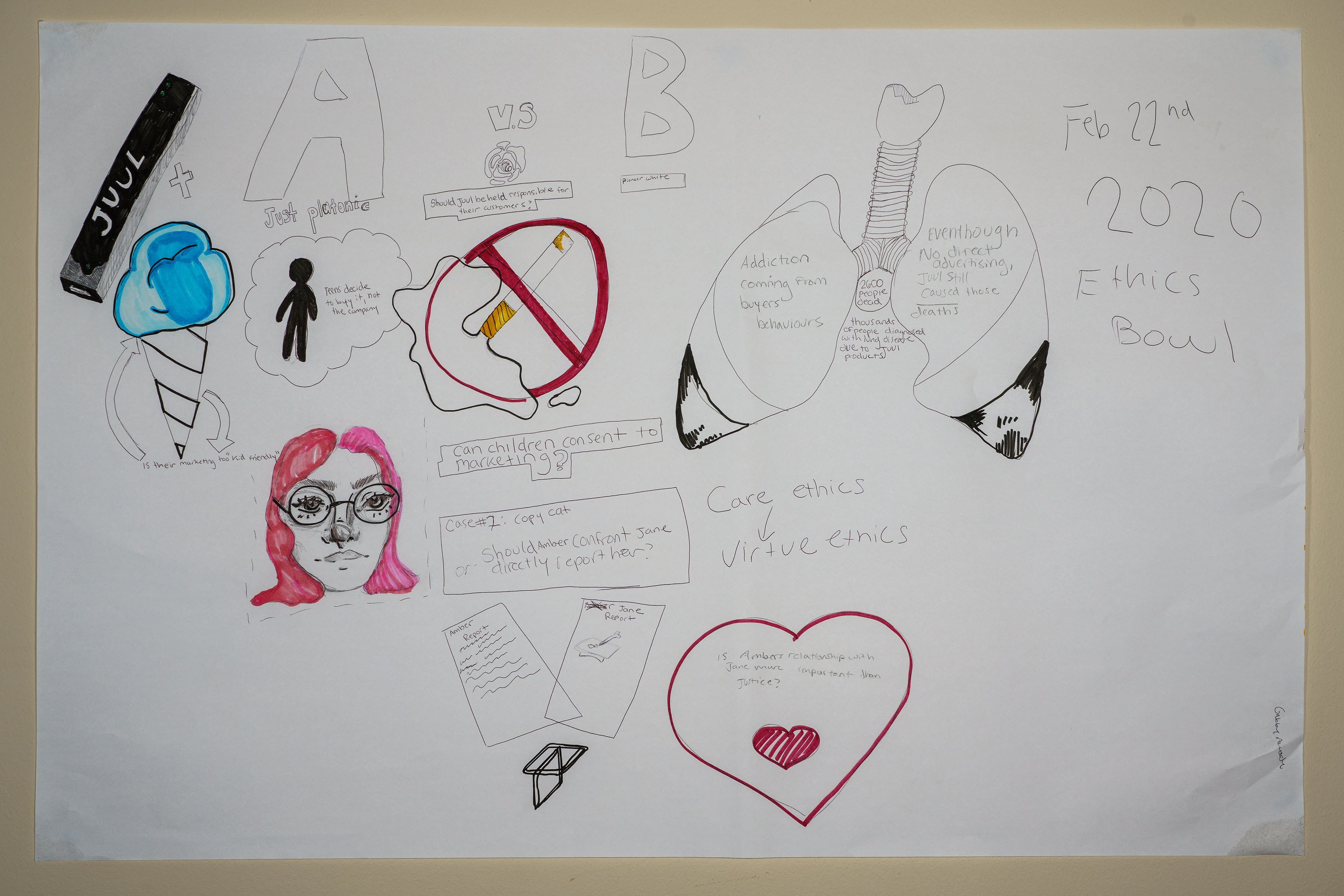 Bowl Scribe Gabby Awada of University Liggett School depicts the ethical dilemmas stirred up by marketing targeted to youth on the part of Juul, a manufacturer of e-cigarettes.

At the closing ceremony, Ann Arbor Greenhills Green was named the winner, with the runner-up award going to The Purple Gang from Ann Arbor Pioneer High. Along with the Hemlock Cup, Greenhills Green won the right to represent the state of Michigan at the National High School Ethics Bowl at the University of North Carolina in Chapel Hill. The annual April National Bowl, which in 2020 endorsed regional bowls from 28 states, was canceled due to the coronavirus pandemic. In years past, Michigan teams have won the Spirit of the Bowl award and have placed in both quarterfinal and semi-final matches at the national competition.