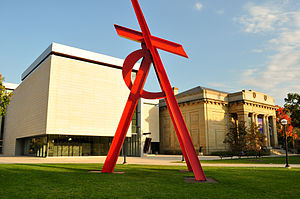 When we told a few people we were doing a podcast on museum ethics, we got some funny looks. And some interesting guesswork about museum ethics. One wondered whether it involved  people who deface works of art and cultural treasures: sticking their gum on Mona Lisa's nose. Another ventured that museum ethics included famous museum heists, which are "all inside jobs," such as the recent disappearance of  masterpieces by Picasso and Matisse from the walls of the Paris Museum of Modern Art.

It may seem as if museums, the art on their walls and the artifacts in their display cases are just for those in the know, the insiders. The curators. But after talking with Professor Ray Silverman,  Director of the Museum Studies Program at the University of Michigan, we know that a new museum ethic is in the works: museums with fewer walls and exhibits opening up to outsiders and showcasing outsider stories. And newly trained curators. Willing to give museum-goers a chance to share their stories. Not just to commemorate them. But to critique these stories, and to become informed curators in doing so.

Take a special tour through the new museum with us as Professor Silverman talks about several important ethical issues confronting museums and museum curators today. National ownership claims and stewardship for all humanity counterclaims over moved archaeological findings and sacred artifacts. The influence of corporations, eager to sanitize the unethical consequences of some of their actions through sponsoring major cultural institutions, especially museums, in an era of financial insecurity. The role of the museum as a space for unfolding and new conversations among and between traditions and between generations. And finally, the expanded role of new curators from caretakers of our one and only heritage to critical questioners of the many meanings of what we choose to collect and whom we decide to remember.

Museum Ethics Podcast Series
Previous PostThe Public Life of the University of Michigan's Center for Ethics (in Public Life)
Next PostA Traditional Nonprofit Adds New Traditions: The Kiwanis Club at the Flim Flam
PRESS RELEASE: YOUTH TAKE THE LEAD ON PHILOSOPHY FOR ALL July 3, 2020
PRESS RELEASE: THE ESSENTIALS OF ETHICS DURING A PANDEMIC June 21, 2020
PRESS RELEASE: TAKING ON THE PANDEMIC FROM AN ETHICAL PERSPECTIVE…AND A SOCIAL DISTANCE OF 1,109 MILES/1,785 KM June 21, 2020