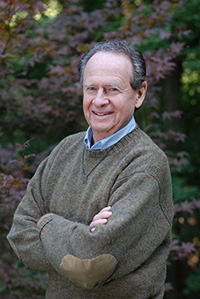 Our listeners are often interested  learning about the career pathways of the individuals we talk with, so we asked Professor Munro to share some professional and personal mileposts during his distinguished career. We also asked him to outline his current academic interests. He kindly took us up, and we are very happy he did. Moreover, we are glad Professor Munro mentioned his wife Ann. Throughout their years in Ann Arbor, they have enriched our community through their many volunteer commitments.

"After my undergraduate work in philosophy at Harvard, I served as a naval officer. Graduate work was at Columbia, at first in philosophy and then in Chinese and Japanese, the field in which I received my PhD. Since 1964, I have taught at Michigan, until 1990 as Professor of Philosophy and then as Professor of Philosophy and of Chinese. When I retired in 1996, I was Chair of the Department of Asian Languages and Cultures. Reseach field work has taken me often to Taiwan, Hong Kong, Kyoto and Beijing. Since 2002, I have periodically lectured and taught at The Chinese University of Hong Kong. My wife Ann, who also speaks Chinese, often accompanied me.

Ann and I love Ann Arbor. We also prize our time in Leelanau County, where, with the periodic help of friends, we built a large log cabin. We started it in 1976 and fully finished it in 1984. We wanted the cabin to be as simple as possible to maintain. There is no electricity except for a generator to pump water into a cistern and to run power tools for repair. But we have propane gas for the fridge and hot water and some gas lamps. Quite civilized still, we overlook a pond.

For the past fifteen years, I have participated in the Programs in Culture and Cognition, and in Evolution and Human Adaptation, in the Psychology Department at Michigan. In them, special attention is paid to how the mind functions, including the relation of biology and culture in the case of our social behavior and associated emotions. These findings of the new sciences dovetail with my enduring interest in Chinese theories of human nature, including claims about universal social traits. Early Confucians anchored their claims about morality in what they viewed as mentally innate familial social traits (such as parent-child bonding, sympathy, shame and respect) and our ability to extend the feelings to wider groups of people.

In two recent books, I have argued that there are insights in Confucian ethics  that are reinforced by the new cognitive sciences (A Chinese Ethics for the New Century, The Ch'ien Mu Lectures, The Chinese University of Hong Kong Press, 2005; Ethics in Action-Workable Guidelines for Private and Public Choices, The Chinese University of Hong Kong Press, 2008). In the end, I believe that by focusing on some traditional Chinese insights into the human condition as well as on the new sciences, it is possible to identify an ethical standard. Such a standard is both workable and also helps guide moral choices, without appealing to a transcendental source. This increases the chance that those choices avoid being impractical or absurd. In traditional Confucianism, such a source of cosmic and moral order was often named Heaven or the Heavenly Way (Tiandao). In other words, I argue that the Chinese who favor aspects of their Confucian legacy no longer need the Hevenly Way (tiandao) as a source of their ethical positions. With a combination of the strengths of traditional Confucianism, plus material from the new sciences, they have enough to formulate a workable and modern ethical system."

Ethics in Action-Workable Guidelines for Private and Public Choices (2008).

A Chinese Ethics for the New Century : the Ch' ien Mu Lectures in History and Culture And Other Essays on Science and Confucian Ethics (2005).

The Imperial Style of Inquiry in Twentieth Century China: The Emergence of New Approaches (1996).